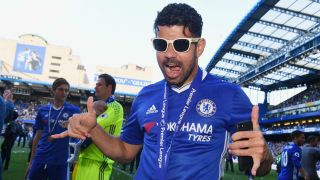 There have been few players who divide opinion quite as much as Diego Costa and his legacy at Chelsea, if he leaves after Saturday's FA Cup final against Arsenal, will be a complicated one.

Talk of an impending £60million move to Tianjin Quanjian has rumbled on since January, but it could be scuppered after the Chinese Football Association announced the implementation of a scheme that amounts to a 100 per cent tax on loss-making clubs; the aim being to limit the soaring transfer fees for foreign players and aid youth development.

Despite the ongoing exit talk Chelsea fans adore the brutish striker, but the questionable on-field antics that are more akin to a naughty schoolboy – a man-sized one – hoping to avoid repercussions for winding up the other kids than a Premier League forward mean he is widely viewed with disdain elsewhere.

When the goals do not come and he is in one of his vexatious funks, the Spain international can be a real source of frustration for the Blues faithful too. Yet, when his antics stem from passion, drive and competitiveness, supporters are more forgiving.

Costa's contribution to the club since arriving from Atletico Madrid for a reported £32m in 2014 cannot be questioned. Nine goals in his first seven Premier League outings made him an instant hit, and when a goal in the EFL Cup final against rivals Tottenham was followed by the Premier League title in Jose Mourinho's first season back at the club he was established as a firm favourite among fans.

Things turned sour as Chelsea began a dreadful defence of their top-flight crown. Costa scored just four times in all competitions before Mourinho got the sack in December 2015, a drop in form that saw him and team-mates Eden Hazard and Cesc Fabregas branded 'rats' by one Chelsea supporter with a shoddily written banner. It was an opinion that gained traction as Costa's goal return steadily improved after Mourinho's exit.

This season has not always been rosy either. While his 20-goal haul and link-up play with Pedro and Hazard in Antonio Conte's much-lauded 3-4-3 has been key to the Premier League trophy's return to Stamford Bridge, there were signs of discontent in January when he was dropped from the team to face Leicester City at the King Power Stadium.

A training ground bust-up with Conte amid talk of a mega-offer from China was believed to be the reason for his absence, though the official line was that he had a back injury.

The striker made an emphatic return to the line-up with a goal in a 2-0 win at home to Hull City, gesturing with his hands that there had been too much talk about his situation as he celebrated. Conte was able to coax enough out of him to aid Chelsea's title push in the closing months but, in his following 15 top-flight appearances, he scored just five times.

Games like the 2-1 victory at Stoke City on March 18 is an example of where he can really grate. Costa was seemingly more interested in antagonising Ryan Shawcross than playing football and was fortunate Gary Cahill's 87th-minute winner secured the points. Mark Hughes said Costa was "adept at the dark arts" in his post-match conference, something that cannot be argued.

Ultimately, though, his goals earned Chelsea 15 points across the campaign, an influence no other player can rival. That is why the Stamford Bridge faithful can overlook the needless outbursts, the obvious and not always well-executed  gamesmanship. Costa has been there when needed most, a trait that is not easy to find and one which has helped restore the damage done to his reputation in west London.

His whacky-but-playful off-field persona has come to the fore since Chelsea sealed the title. Footage of him aiming a fire extinguisher at journalists, spontaneously shouting and doing pull-ups in order to try to cut short Conte's media duties after top-spot was clinched at West Brom went viral, as did photos of his impromptu half-time trip to the media room buffet at Stamford Bridge during the 4-3 victory over Watford.

A two-handed wave as he made way for Michy Batshuayi after the hour-mark in the 5-1 win against Sunderland last week add fuel to suggestions of an impending exit.

Although the reported China switch is now in jeopardy, should the 28-year-old leave after the third season of a five-year deal there will be frustration he has not given everything he could have to the club. His quality is undoubted and his contribution was paramount to a pair of Premier League titles. Even if he adds an FA Cup trophy, a thorny second season and a premature departure will make it difficult for him to be remembered with unwavering fondness.

But that is Diego Costa for you.