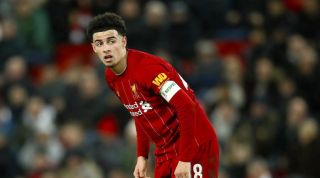 Jamie Carragher believes Liverpool's young players will play a significant role in the first-team squad in the coming years.

Jurgen Klopp has handed opportunities to a number of the club's academy graduates in cup competitions in 2019/20.

Curtis Jones and full-back Neco Williams are among the starlets who have impressed when given an opportunity this term.

And Carragher thinks the club's youngsters can fill important voids in the squad going forward.

"Curtis has kicked on this year, but that's what young players do," he told the Liverpool Echo.

"They just make a jump and you're never quite sure when it's going to happen but they have to make that jump if they're going to rise to the ability of the first-team and it looks like he has made that jump now.

"When he plays in the younger team, it almost looks like he's a first-team player dropping down to play with the younger players.

"The one criticism of this Liverpool team is sometimes a lack of creativity from central midfield, and I think he could provide that.

"Whether Liverpool go into the market to change that, or [Takumi] Minamino maybe changes that, but Curtis Jones and some of the other younger players will be putting things in the managers head about whether he needs to go into the transfer market.

"We haven't got great cover at full-back - James Milner is there but he's a 34-year-old midfield player and when you consider Liverpool are the champions of Europe and how good they are, there should probably be another recognised player in those positions.

"But I do think Neco Williams, with the way he has played, you wouldn't think about going into the market to buy anyone and you've got Ki-Jana Hoever there as well.

"These young kids now and what they have done are going to save a lot of money in the summer."