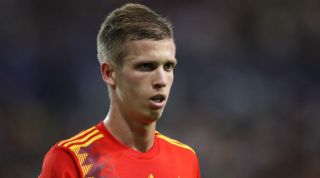 Manchester United had a bid for Dani Olmo rejected by Dinamo Zagreb this summer, according to Sportske Novosti.

Ole Gunnar Solskjaer was unable to sign a midfielder before the Premier League's transfer window closed on Thursday.

However, he did attempt to secure the services of Olmo, who starred in Spain's victory at the European Under-21 Championship in June.

United offered £24m for the former Barcelona youth-teamer, but their bid was immediately rejected by Dinamo.

Everton and Bayern Munich also failed in attempts to prise the 21-year-old away from the Croatian club.

United begin the 2019/20 campaign against Chelsea on Sunday.