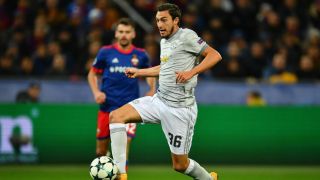 Matteo Darmian has attracted interest from Serie A clubs but Manchester United do not want to sell the defender, according to his agent.

The Italy international has been linked with a move away from Old Trafford in the transfer window, having managed only two starts in the Premier League this season.

Roma are reportedly keen to bring him to the Stadio Olimpico but Tullio Tinti says they have not made an offer and insists United want to keep him for now.

"I've not received any calls from Roma for the player," Tinti told Rete Sport. "There is contact with other teams in Serie A, but not with the Giallorossi.

"For the moment, the boy is not for sale."

Darmian has fallen behind Antonio Valencia, Ashley Young and Luke Shaw in the pecking order at full-back under Jose Mourinho.

The 28-year-old was even overlooked for Monday's 2-0 win at Everton despite Valencia missing through injury and Young serving a three-match ban for violent conduct.

Darmian, who was signed from Torino in 2015, could feature in Friday's FA Cup clash with Derby County, with Mourinho expected to rotate his squad.