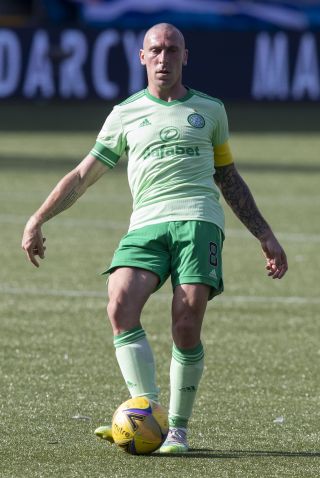 David Turnbull believes Celtic skipper Scott Brown is the perfect example of how a talented young Scot’s big-money move to Parkhead can work.

A knee issue in his medical scuppered the midfielder’s transfer to Celtic in June 2019 but the Scottish champions agreed to pay Motherwell a similar fee to the potential £3.25milion on offer after the 21-year-old returned to full fitness after surgery.

The Fir Park club said the fee was nearly double their previous transfer record, which was the £1.75million received from Celtic for Phil O’Donnell in 1994.

Brown joined Celtic from Hibernian in 2007 for a fee of £4.4million, the highest transfer fee paid between two Scottish clubs, and has enjoyed a glittering career since.

“He has obviously been here for years,” said Turnbull.

“He came here as a young boy all those years ago and he is someone you can look up to. If I can do half as much as he has done it would be amazing.

“I believe in my ability and I feel as if I can come here and make an impact. Hopefully I can do that I and I feel ready.

“I always believed in my ability and that after my injury not much would have changed.

“It was always in my head that I would come back and be the same player, it is just how long it would take.

“I am just delighted to be here and can’t wait to get started.”

Turnbull could make his debut against Motherwell at Parkhead on Sunday and he will be forever grateful to the Fir Park club.

He said “It will be strange. If it happens it will be a weird one.

“Obviously I have been with them all the years and then switching sides and bumping into them all again, it will be a fun experience.

The fan who lived the dream and now leaves behind a legacy.— Motherwell FC (@MotherwellFC) August 27, 2020

“They have all been delighted, putting messages in the group chat, wishing me luck, saying it is a great move and they are all buzzing for me although I think I am out of that (group) now.

“I have been at Motherwell my whole life. I need to thank them and physio Davie Henderson for looking after me the past 14 months.

“They have been brilliant for me, helping me through every part of it and I think they are all delighted as well so it’s a win-win.”