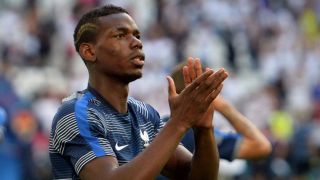 Juventus legend Alessandro Del Piero wants Paul Pogba to remain with the club, but concedes the Frenchman faces a difficult decision over a potential move to Manchester United.

Reports this week suggested United were set to bid £100million for the midfielder they let go to Juve for nothing in 2012.

Such a fee would see the 23-year-old become the most expensive player in history, although he has more on his mind at present with France preparing to face Portugal in Sunday's Euro 2016 final.

"Pogba is a great player, has great potential and has already shown that to everybody," Del Piero, who spent almost 20 years at Juve, told Sky Sports.

"I don't know what's going to happen, there's a lot of talk and I think Juventus want to keep him for at least one more year.

"But definitely United are a huge club, it's also tough for him to decide what's best. As an Italian and a former Juventus player, I hope he stays for at least one more year."