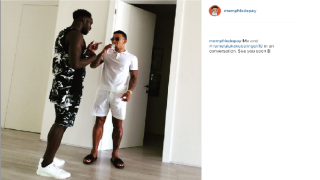 Memphis Depay has posted a cryptic message on his Instagram account that may have revealed Romelu Lukaku as the "surprise" striker set to join Manchester United.

After United's pre-season win over America in the International Champions Cup, manager Louis van Gaal hinted he was still in the market for another forward but his identity remained a secret.

Cristiano Ronaldo, Edinson Cavani and Robert Lewandowski have all been touted as the man Van Gaal was looking at, however Depay's post could have let slip that Lukaku is United's target.

The Netherlands international posted a picture of himself and the Everton striker on Instagram on Monday, with the message: "Me and @romelulukakubolingoli10 in an conversation. See you soon B."

Lukaku embellished his reputation on Sunday with a hat-trick against Hearts, the Belgium striker securing a 3-1 win over the Scottish side.