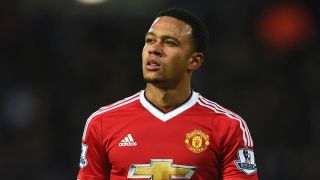 FA Cup winners United had to settle for fifth place in the 2015-16 Premier League but will be looking to challenge for the title this campaign with the Portuguese heavyweight in charge.

Louis van Gaal was dismissed at the end of last season by the United hierarchy, who have signed defender Eric Bailly and striker Zlatan Ibrahimovic, with Henrikh Mkhitaryan expected to follow.

Depay, largely a disappointment following his switch from PSV in June 2015, will be under pressure to perform as part of the new regime, starting with the International Champions Cup match against Mkhitaryan's Dortmund in Shanghai on July 22.

"It's pre-season so we will be working on our shape and how we want to play and I'm looking forward to it," the Netherlands international forward told the United website.

"Dortmund have a really strong team and are difficult to beat.

"I think it will help to play strong teams. We can see how strong we are at that point which is always good to know. I think both will be tough games."

United will take on City in Beijing three days later in the first instalment of the renewed rivalry between Mourinho and Pep Guardiola, who were fierce foes during their time in charge of Real Madrid and Barcelona respectively.

"Of course the derby means a lot to us and the fans," Depay said.

"It's really important to win those games. The rivalry is very big against City and there is always a good atmosphere when you win those matches. We know we will have a lot of supporters there so we have to win and it could be like a home game for us."

Former Chelsea and Inter boss Mourinho officially started work as United manager on Monday, as he aims to improve on the underwhelming attempts by David Moyes and Van Gaal to fill the void left by Alex Ferguson's retirement in 2013.