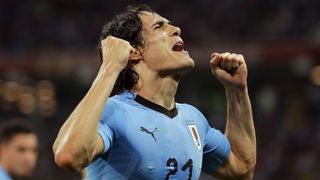 Didier Deschamps has prepared France to face Edinson Cavani on Friday but expects Uruguay to be a dangerous opponent even if the striker fails to recover from injury.

Cavani suffered a muscle problem in the 2-1 World Cup last-16 win over Portugal and is a doubt for the quarter-final showdown with France in Nizhny Novgorod, despite having returned to training on Thursday.

Deschamps has a plan in place for the Paris Saint-Germain striker but thinks Oscar Tabarez has plenty of strong alternatives at his disposal.

"I'm preparing my team for if Cavani plays," the France coach told a news conference. "But Tabarez has some terrific options. [Cristhian] Stuani is also an excellent player, he scored 21 goals with his club side, and I've prepared my team with these different options in mind.

"Cavani needs no introduction. He started the tournament very well and, since he plays in France I know him very well, but it won't change Uruguay's profile. His quality is above that of many strikers but Stuani and [Cristian] Rodriguez are also extremely talented. We're ready for all these different options."

Les Bleus have arrived in Nizhny Novgorod, where tomorrow (at 16.00 CET) they will lock horns with in the quarter-finals of the ! July 5, 2018

France drew 0-0 with Uruguay in Deschamps' first match in charge in 2012, the same scoreline from four of the last five times these teams have met.

Deschamps feels there is little point comparing the teams to those that met six years ago, but he says Uruguay's defensive strength is part of their make-up.

"It's a cultural thing for them; they have this in their DNA," he said. "They have South American quality when it comes to technique, they can be aggressive when they have to, they know how to use their bodies, their arms when it's necessary.

"But they have this dedication: when they don't have the ball, they know what to do. Everybody knows how to defend, the strikers even if it's necessary."

The match will see Antoine Griezmann come up against Atletico Madrid team-mates Diego Godin and Jose Gimenez, and Deschamps hopes his forward may have an advantage.

"He knows their strengths and probably also their weaker points," he added. "I know these players probably respect each other a lot, they've played together for Atletico for a long time.