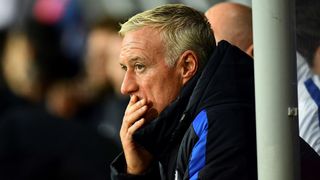 France boss Didier Deschamps was left to rue a below-par first-half performance and a string of missed chances as his side were held to a 0-0 draw by Belarus.

The visitors were widely expected to open their 2018 World Cup qualification campaign with a comfortable victory in Borisov against a side languishing 63 places below them in the FIFA rankings.

But instead, the beaten Euro 2016 finalists were unable to breach a determined Belarus defence that dug deep to secure a seventh clean sheet in the last nine games.

Olivier Giroud and Antoine Griezmann both went close to finding the net for the visitors, as did skipper Raphael Varane who struck the bar with a second-half header, while goalkeeper Andrey Gorbunov made several fine saves for the hosts.

And while attempting to remain philosophical, Deschamps was clearly disappointed by his charges' inability to turn their dominance into three points.

"We should have done better in the first period," he told Canal Plus.

"Then, in the second half, we created a lot of chances but came up against a goalkeeper who made some wonderful stops. But that's football.

"In our last game in Italy (a 3-1 friendly victory) we had four chances and scored three times. This time we failed to capitalise."

Although pleased with his side's improved second-half display, Deschamps conceded that the result was a disappointing one for Group A's top seeds.

"Our second period was much better, with more movement and speed," he said.

"But we can always do better. It was enough to win tonight. But when we do not put finish our chances, we cannot win.

"We left two points behind and there will be more complicated matches to come."

Next on the agenda for France are Bulgaria next month before travelling to Amsterdam to take on a Netherlands side that fought out a 1-1 draw with Sweden on Tuesday.