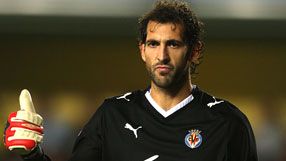 The 27-year-old has made more than 50 la Liga appearances for the Yellow Submarine since arriving from Real Madrid in 2007, having featured in just two league games for the Bernabeu outfit.

Speculation has recently surfaced tipping the Spaniard - who has one cap for his country - with a transfer to Old Trafford, adding to him a lengthy list of stoppers linked with Sir Alex Ferguson's side as a replacement for Edwin van der Saar.

And Lopez has revealed that he would be keen to follow fellow Spanish glove-man Pepe Reina to England, should the opportunity present itself.

"I'm aware of rumours and the Premier League is very attractive," he said in The Sun.