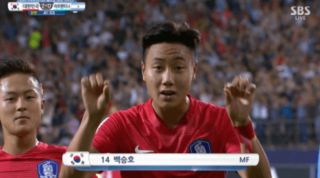 Maradona appeared to overly celebrate when he drew Argentina's name out of the hat for the FIFA U20 World Cup, and would therefore be in Group A with South Korea.

Well, revenge is a dish best served cold, and Barcelona B forward Paik was there to offer it.

The 20-year-old converted a penalty against Argentina on Tuesday to put South Korea 2-1 up in the first half, and celebrated by going straight over to the camera pretending to hold the piece of paper that Maradona seemed overjoyed to be shaking.

The goal proved a killer blow: hosts South Korea held on to win the match 2-1 and eliminate the South American giants from the tournament after just two matches (they lost 3-0 to England in their group opener).