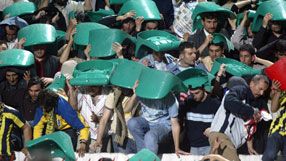 The case had become a matter of state, with politicians across Turkey's fractious political spectrum and even the powerful military warning that penalising Diyarbakirspor could harm Turkey's national unity and radicalise Kurdish fans.

The Turkish Football Federation said on its website it had ruled against handing a second default defeat to Diyarbakirspor after a match against Istanbul's Buyuksehir Belediyespor was abandoned in the 87th minute when fans invaded the pitch.

The federation had already penalised Diyarbakirspor with a 3-0 default defeat to Bursaspor, after their match earlier this month was abandoned in the 17th minute due to crowd violence.

A second default defeat for Diyarbakirspor would have meant automatic relegation.

Minority Kurds often complain of discrimination at the hands of the Turkish state. The government has sought to expand their rights to boost Ankara's European Union membership candidacy.