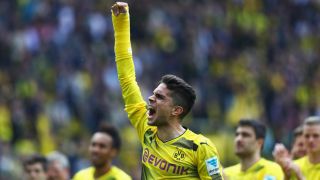 Borussia Dortmund defender Marc Bartra says his return to action following the attack on the team bus was his best moment in professional football.

The 26-year-old needed surgery on his wrist after being injured by broken glass when three explosive devices were detonated close to the Dortmund bus as the team travelled to Signal Iduna Park for a European clash with Monaco on April 11.

Bartra was unable to play again until May 20, when Dortmund concluded their Bundesliga campaign with a thrilling 4-3 win over Werder Bremen that secured an automatic Champions League spot.

The Spain international went on to win the DFB-Pokal final and enjoyed substantial success with Barcelona early in his career, winning five LaLiga titles and two Champions Leagues in a trophy-laden six-year spell.

However, he believes that the emotion of his return at Signal Iduna Park makes it the pinnacle of his career to date.

"I remember coming out of the hotel. There were fans gathered around as usual; maybe more, because it was a big game," he recalled in an interview with the Bundesliga's official website.

"Then I heard this bang. It sounded like a kind of machine gun but I had no idea what it was. I was hit in the arm and felt this intense pain, and then a very warm wind blowing across my face.

What a match, so thrilling, what an atmosphere, such a feeling.. Really HAPPY and PROUD!Tarde increible la de hoy..FELIZ!DANKE Familie!! May 20, 2017

"I couldn't move, I couldn't hear anything, just this beeping sound. They said we had to lie down on the floor. I could see that was what I was supposed to do because everyone else did, but I couldn't move. Eventually I somehow managed it.

"Everyone was shouting 'what's happening, what's happening?'. We didn't know where it had come from. My arm was really hurting and when I looked, it was covered in blood.

"Then Papa Sokratis and Roman Burki came. They called for the doctor, saying I was in a bad way. Our physio came over. I was lying on the floor, unable to move.

"At that moment, all I was thinking about was my daughter. The physio gave me a few slaps on the cheek to keep me conscious. I told myself, Marc, you can't nod off now. I was afraid something else might happen.

"I don't know how long it lasted. It might have been 10 minutes but for me it felt like about four hours."

Recounting his return against Bremen, he continued: "At home, in front of our supporters... Just being able to play football again, the thing I love most.

"And to top it all, we won the game to finish third in the table and clinch an automatic place in the Champions League.

"When I got home, I told my wife and my family that it was the happiest moment of my professional career. it was unbelievable. I've experienced a lot of great moments but that was fantastic.

"I just felt surrounded by so much love all the way through it."