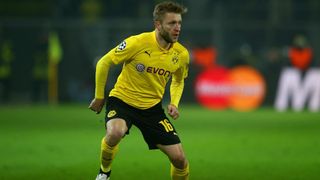 Borussia Dortmund are planning to hold talks with winger Jakub Blaszczykowski amid reported interest from Premier League side Liverpool.

The 30-year-old, who enjoyed largely a strong Euro 2016 campaign with Poland - scoring two goals - has been linked with a possible reunion with Jurgen Klopp at Anfield ahead of next season.

Blaszczykowski spent last season on loan with Fiorentina after being considered surplus to requirements by Thomas Tuchel, and reports in Germany have suggested he could join Liverpool for as little as €5million.

And sporting director Michael Zorc says Dortmund will speak with the player about his plans for the future.

"Kuba is a BVB player," he told Bild. "We'll talk in the next few days about his future."

Dortmund have already seen Mats Hummels and Henrikh Mkhitaryan depart for Bayern Munich and Manchester United respectively since the end of last season.