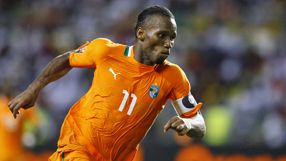 The channel did not give any more information and Galatasaray could not be reached for immediate comment.

The 34-year-old, who is on Africa Cup of Nations duty with his country, moved to China after helping Chelsea win the Champions League last May.

Drogba signed a two-and-a-half-year deal with Shenhua in June that was, according to media reports, worth around $300,000 a week.

However, the Shanghai-based Oriental Sports daily said last month that the player was owed money by the club.

If his move to Turkey is confirmed, the transfer will come less than a week after Netherlands midfielder Wesley Sneijder joined Galatasaray from Inter Milan.

The signings of Drogba and former France striker Anelka were heralded as a coup for the Chinese Super League last year.

After years of negative headlines brought by match-fixing scandals which hit the league's credibility and led to jail terms for former Chinese football chiefs, the two transfers drew attention for all the right reasons.

Having left Olympique Marseille to join the Londoners in 2004, he won everything in England and his strength and speed made him a handful for world-class defenders.

He was Chelsea's Champions League talisman last season, scoring a brilliant headed equaliser in the final against Bayern Munich to force extra time and then scoring the winning penalty in the shootout.