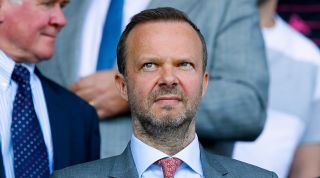 Yet although the 2019/20 campaign has been able to resume, no supporters will be present at stadiums until next season at the earliest.

And Woodward has saluted United's followers as the team prepares to make its return to Old Trafford against Sheffield United on Wednesday.

"On the pitch, there is no escaping the reality that the coming months are going to be difficult for everyone in football and we are no exception," Woodward said in United Review.

"However, our club’s foundations are solid and, provided we stick together and manage our resources carefully, we will come through this period with our strength intact – thanks in large part to the loyalty of our fantastic supporters.

"As a club, we say ‘thank you’ through the ‘United for the Heroes’ banner displayed in the Sir Alex Ferguson Stand, as well as the NHS logo on the players’ shirts.

"You will also see powerful anti-racism messages, on the players’ shirts and in the stands, and we are proud to be uniting with our players and the rest of the Premier League behind this crucial cause."

A 1-1 draw with Tottenham on Friday night means United are five points adrift of the top four ahead of their 31st game of the campaign.

However, fifth place will bring with it a Champions League spot provided Manchester City’s two-season ban from continental competition is upheld by the Court of Arbitration for Sport.