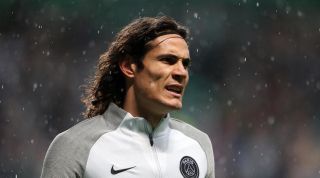 Cavani has fallen out of favour at the Parc des Princes this season following the signing of Mauro Icardi last summer.

The Uruguay international has been linked with a move to Chelsea in the January transfer window, with Frank Lampard keen to bolster his attacking options.

The need to sign reinformements up top has been heightened after Tammy Abraham injured an ankle in Tuesday's 2-2 draw with Arsenal.

But the Blues look set to miss out on Cavani, who is poised to join Atletico Madrid instead.

The former Napoli centre-forward has agreed an 18-month deal worth around £8.5m per year with the Spanish side.

Atletico are now negotiating a transfer fee with PSG and hope to complete the move in the coming days, although Thomas Tuchel is reportedly keen to keep hold of Cavani until his contract expires at the end of the campaign.

“He wants to join another club in Europe,” Luis Cavani, Edinson's father, said. “It would please me that he plays here [at Atletico]. [Diego] Simeone wants him now [but] the head coach of Paris Saint-Germain has also said he needs him to help compete in the Champions League.

“I think there is a strong chance he will go to Atletico. The option to join the club always remains in June. There are lots of other clubs but when you give your word to a team, you respect it.

"If tomorrow, if he is available and Atletico still want him, I think he will sign. He is a player who needs time to play and today, he only plays four or six minutes per game. PSG are treating him unfairly.”

Chelsea will turn their attention to the FA Cup this weekend, when they travel to Hull in the fourth round.