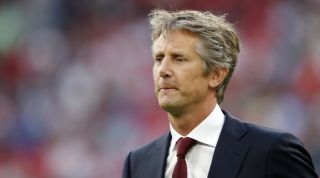 The Premier League side have been open to filling the role without success and Van der Sar would be a well-qualified candidate.

As chief executive of Ajax, he has overseen a project that resulted in a young, exciting team reaching the Champions League semi-finals last season.

Asked about the prospect of returning to Manchester United after Vincent Kompany’s testimonial on Wednesday, he told the Times: “You never know. At the moment, Ajax is the principle thought where I’m putting all my time and effort in and whatever happens in the future, we will see.”

Were he to take the job, Van der Sar would have reduced responsibilities from his current role in Amsterdam, where he oversees the commercial strategy of the Eredivisie champions.

As technical director he would be focused on recruitment, offering a significant voice when it comes to signing players, but the 48-year-old doesn’t think that the change of role would be problematic.

He said: “No, I think the idea is that you have an opportunity to grow yourself and to learn. That’s what you do as a football player, as a young player.

“That happened when I went abroad to Italy and then when I went to England with Fulham and even at United, and it’s similar now. I stopped playing in 2011, did a masters degree in sports management and started as a marketing director in 2012, so you learn on the job.

“I’m the chief executive at Ajax, Marc Overmars does the technical director role, so in that way we have a focus in Amsterdam.”