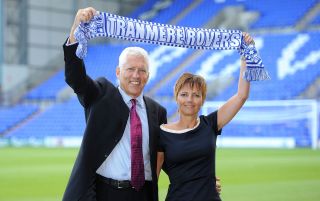 The EFL has hit back at claims by Tranmere chairman Mark Palios that his club feared a 15-point deduction if they failed to fulfil Saturday’s League Two fixture against Salford despite positive coronavirus tests depleting the squad.

Palios described the situation as “incredible” and told the PA news agency on Saturday night that the EFL had informed him that “if we called the game off, the circumstances would be investigated and the penalty for failing to fulfil a fixture would potentially be 15 points.”

The EFL hit back in a strongly-worded statement in which it appeared to deny that Tranmere had made a specific enquiry, and added: “To suggest that a sporting sanction of ‘up to 15 points’ could be applicable as a result of potentially not playing a fixture is at best extremely misleading.”

However, the EFL statement did note that in the case of a club calling off a fixture without specific advice, the governing body would look at the “specific circumstances” before potentially referring them to an independent disciplinary commission.

The EFL said: “Each situation is looked at on a case-by-case basis depending on what factors are present within each club and that is why some matches have been postponed whilst other clubs have been cleared to play, with the health, safety and well-being of players always being the priority.

“In the event a club does inform the League it is unable to fulfil a fixture, in normal circumstances, the club is deemed guilty of misconduct and charged with a breach of EFL Regulations.

“If that same situation arises as a result of COVID-19 positive tests, the League would firstly look at the specific circumstances, before determining whether a club was to be subject to a charge.

“In both scenarios it would be an Independent Disciplinary commission not the EFL that would determine any sanction, if applicable, having heard representations from both parties.

“However, there is no sporting sanction tariff in this regard and a commission determines the type of punishment and to what level.”

Two unnamed Tranmere players tested positive ahead of the match at the Peninsula Stadium, which in turn resulted in four other players having to self-isolate – a situation which left Rovers with only 10 first-team players available.

Palios said the club had approached the EFL for guidance, but were told if they had youth-team players who were fit then “we had to play” or face an investigation into the circumstances surrounding the late cancellation and potentially disciplinary action which could result in a 15-point penalty.

The EFL responded that “Tranmere Rovers did contact the League last week with a specific query but this was in respect of under-21 players due to the recently introduced squad lists in League Two.”

Rovers went 2-0 down inside the opening 20 minutes against Salford but staged a dramatic late recovery with goals from Kieran Morris and Paul Lewis salvaging a 2-2 draw.