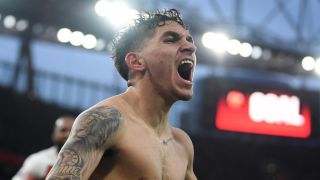 Lucas Torreira is an example for Arsenal players due to his high level of physical condition, according to Unai Emery.

Torreira has been a star of Arsenal's recent performances, the midfielder scoring in a 4-2 Premier League derby defeat of rivals Tottenham.

The Uruguay international's energy and defensive nous has given Arsenal improved protection in front of the back four, although Torreira's Spurs strike was his maiden goal in the Premier League.

And Emery feels Torreira, who did not start a Premier League game until the middle of September, is showing the rest of his Arsenal squad how to prepare physically for a busy festive schedule.

"His performance is improving, each player with taking confidence, with taking responsibility also, helping each other, every player," Emery told reporters. "Lucas Torreira has big qualities, and in his physical condition.

"I want every player to be able to play Sunday-Wednesday-Saturday with a big performance in condition physically, and tactically and technically. Lucas Torreira - in this quality he is very high."

Lucas Torreira in the this season... recoveries duels won interceptionsclearances has BOSSED IT  7 December 2018

Arsenal have not lost since August, going 20 games unbeaten in all competitions under Emery since suffering defeats in each of his opening two games in charge, against Manchester City and Chelsea.

And the Spaniard, a three-time Europa League winner with Sevilla, feels his philosophy is beginning to take shape with the Gunners.

"First we want to create one style, one idea," Emery said. "A stronger idea with good positioning on the pitch and with the ball, good communication between us to dominate the match.

"But we know the opposition they also want to do the same. And without the ball, don't concede a lot of metres on the pitch. And be more far away from our box when the opposition team have the ball.

"The challenge is improving this because we are conceding more goals than we want. Our balance is positive but we can improve that. Every day we are working with the movies and with tactical moments on the pitch before the matches, we are repeating that.

"And we want confidence in every match and we are improving in this. For example the last two matches against teams like us, their mind is to be in the top four, I think the team - not for 90 minutes because it's impossible to do it for 90 minutes - but more or less we control a lot of minutes in these matches."

Arsenal are at home to Huddersfield Town on Saturday.