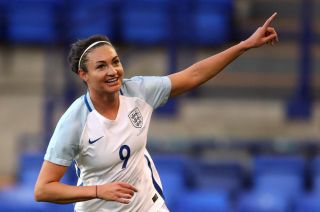 Jodie Taylor believes England are playing their “best ever” football but the Lionesses forward thinks there is still room for improvement.

England reached the World Cup semi-finals this summer but were held to a 3-3 draw by Belgium last week in their first match since the tournament in France.

The performance led head coach Phil Neville to say his players might need to “suffer some pain” in order to improve.

Ahead of England’s fixture against Norway at Brann Stadion in Bergen, Taylor told BBC Sport: “You look over the last few years and the style and brand of football we’re playing now is the best it has ever been.

“We went toe-to-toe with America in the World Cup. The fact we are able to identify areas that we will probably make huge strides in over the next six to 12 months is quite exciting.

“Norway will be really tough but we’ll look to get things right we didn’t against Belgium. We are at that level now where we are striving to be better in every area, both on and off the ball we need to be better.

“It’s going to be an interesting few months. But as players we all want to improve, and we all buy into the fact that is something we all need to be better at – but it’s exciting times.”

England had a two-goal lead against Belgium, with Taylor opening the scoring, but needed a late penalty from Nikita Parris to rescue a draw.

Taylor said: “It was one of the games we learnt a lot from. Over the next few months it will be really telling in terms of what we’ve learnt from the day.

“It was the first game back from the World Cup and a good learning match. Hopefully we will get better as we move on.

“Coming away from the World Cup and not achieving what we set out to achieve, we’ve all reflected and identified areas we need to improve on to help us win major tournaments.”