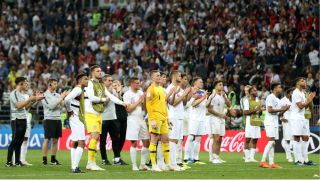 Jose Mourinho believes England have cause for optimism following their 2-1 World Cup semi-final defeat to Croatia.

Kieran Trippier gave England the lead in the fifth minute in Moscow but Ivan Perisic and Mario Mandzukic broke English hearts as Croatia came for behind to progress after extra time.

England had the second youngest squad at the tournament, with an average age of 26 years old, with key players such as Harry Kane, Dele Alli and Raheem Sterling all under 25.

The country's Under-20 and Under-17 squads won their respective World Cups in 2017, and Mourinho sees a bright future for the Three Lions.

"The team improved a lot in relation to previous appearances. It's a young team, the majority of the players will play in the next World Cup with more experience at club level.''