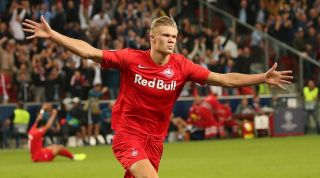 The 19-year-old shot into the public eye with a first-half hat-trick for Salzburg against Genk on his Champions League debut this week, in a 6-2 win for the Austrians.

Manchester United are among the clubs to have been credited with an interest in the striker, as well as Arsenal.

His father, Alf-Inge Haaland, represented Leeds, Manchester City and Nottingham Forest during his playing career, and his son Erling was born in the Yorkshire city.

But the striker’s father dismissed the notion that family links to two of the Red Devils’ biggest rivals could be problematic.

Regarding potential interest from Old Trafford, he told TV2 (via Sport Witness): “It would be nice. It is important to distinguish between being a supporter and a job. So, I have a very relaxed relationship. It’s a little different when it’s serious.

“He is a good player who plays for a very good team. It’s a club that bets on young [players] and has given him the chance.

“They have thought for a long time that they would give him the chance this summer, and at the same time there are many things that have taken place.

“Most of the job he has done himself but he has been assisted by his former team-mates, and current coaches and team-mates, in addition to the hard work of many years.”