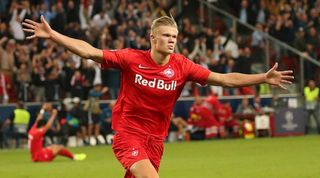 Manchester United fear they could miss out on Erling Haaland because the Red Bull Salzburg striker is represented by Mino Raiola.

Haaland is one of the hottest properties in world football at present, having enjoyed a remarkable few months for both club and country.

The striker hit the headlines in May after scoring nine goals for Norway in a 12-0 demolition of Honduras at the Under-20 World Cup.

And he has also been in incredible form for his club side at the start of the current campaign, finding the net 15 times in 12 Austrian Bundesliga outings.

Haaland has been prolific in the Champions League too, having struck seven goals in four appearances to lead the competition’s scoring charts.

The Norwegian’s sensational performances in recent months have seen him linked with a host of major European outfits, including Barcelona, Real Madrid, Liverpool and United.

The Red Devils are keen to improve their attacking options when the transfer window opens in January, as Ole Gunnar Solskjaer’s side attempt to close the 10-point gap separating them from the top four.

Haaland is among the forwards United are keeping tabs on, with The Athletic reporting that Solskjaer sent his most trusted scout, Simon Wells, to watch the 19-year-old in action.

However, the Reds acknowledge that their pursuit of the centre-forward is complicated by the identity of his agent.

Raiola has had plenty of dealings with United in recent years as the representative of Paul Pogba, Zlatan Ibrahimovic and Henrikh Mkhitaryan.

The Italian superagent has clashed with United officials and been criticised by various prominent people associated with the 20-time English champions, including former right-back Gary Neville.

The club are reluctant to do any more business with Raiola, who could also hurt United’s ambitions of landing Haaland.

Solskjaer’s side are next in action against Astana in the Europa League on Thursday, before welcoming Aston Villa to Old Trafford for a Premier League clash next weekend.

Long read: The making of Jose Mourinho – how did he go from 'the translator' to 'the Special One’?

Ranked! Which Premier League team has the easiest fixtures up to New Year?