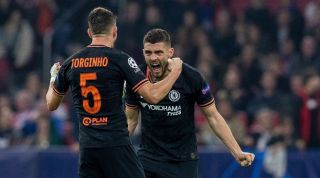 There will be a distinguished midfielder at the Etihad Stadium on Saturday who misses Maurizio Sarri. “He deserves huge credit for the way his sides play, and he's already made his mark at Chelsea,” said a particularly vocal admirer not long after the Italian’s side were thrashed 6-0 by Manchester City in February. “It's not easy for a manager to arrive at a club and make fundamental changes, but he has done so quickly.”

Enough about Pep Guardiola, however. If there is something quintessentially Guardiola about becoming ever more exaggerated in his praise for perhaps the most misunderstood manager in recent Premier League history, about him being the only man who actually seemed to understand Sarri, there are a couple of younger midfielders who are benefiting from being separated from the current Juventus coach.

If the story of Chelsea’s season is one of how their emerging talents are flourishing under Frank Lampard, benefiting from a change of ethos and a transfer ban, the subplot is the rejuvenation and reinvention of Mateo Kovacic and Jorginho. They are still playing in the centre of midfield, with the Italian still the deepest player there even when N’Golo Kante is also on the pitch, but they are doing so differently.

Where there was passiveness, there is now purposeful passing. Where there were indictments of a regime, there are now endorsements of it. Jorginho and Kovacic are two of Lampard’s less obvious success stories but, in a campaign when Kante has been limited to 467 minutes of Premier and Champions League football, among the more significant ones.

Could this weekend's game against Manchester City be the making of Frank Lampard's Chelsea?

They have provided the platform for a prolific team. It feels symbolic that Jorginho already has more assists this season than in the whole of last and if that is not saying much – his 3,118 passes brought none in his debut campaign, though his expected assists suggested he was creating chances that others were missing – the goals he has fashioned for Tammy Abraham, at Wolves and Watford, showed both precision and incision; they were defence-splitting penetrative passes.

And it illustrated the difference in his game. He has displayed more attacking intent. He is leading the league for through balls, not just square balls. He is playing fewer passes but making more key passes. Both he and Kovacic are playing more long passes; given how cultured each is, it feels wrong to brand them long balls. This is not Sarri-style prescriptive short passing for short passing’s sake. The worst excesses of a sideways passing game have been removed from each. The ambition has extended simply beyond keeping the ball.

Which, actually, both remain very good at. The surprise is not that their pass completion rates have dropped under Lampard, with instructions to get the ball forward quicker and to play the ball into the final third more, but that they are still so high. Kovacic’s, at 90.3%, puts him sixth among Premier League midfielders. Jorginho, at 88.4 percent, is not far behind. It shows the technical skill to explain a combined price tag of almost £100 million.

That juxtaposition between evident ability and a lack of end product brought frustration last season. Kovacic was branded the division’s most pointless player on this site and, in Sarriball, he was. His job-share with Ross Barkley lent itself to mockery; regardless of their performance level or the scoreline, Sarri would invariably bring Kovacic on for Barkley or the Englishman for the Croatian. They were interchangeable in switches that invariably lacked imagination. Lampard has actually made Sarri’s signature substitution four times, but it has never seemed as pre-determined as it was under the Italian.

Now Kovacic and Jorginho are being allowed to express themselves more after being liberated from the straitjacket Sarri imposed. They are more forward thinking, yet perhaps more defensive. Each is recovering the ball more times per match than he was last season. Kovacic covers so much ground he is more of an all-action presence, just as Jorginho’s greater capacity to collect cautions shows each is getting his hands dirty.

Neither is a proxy for an unpopular manager anymore. Jorginho understandably objected to the perception he was the teacher’s pet under Sarri. Instead, it has been uncontroversial when he has acquired a seniority in the squad under the seemingly impartial Lampard. Installed as vice-captain and penalty taker, he can be judged on his own merits. When Kante has been missing, he has assumed a different kind of responsibility. Early in the season, there was the sense Kovacic and Jorginho were too similar to compensate for the loss of the Frenchman; more recently, they have dovetailed so well they have demoted his absence to the rank of a footnote. Now Kante is back, the greatest failing in Kovacic’s game, his lack of goals, may become more of an issue.

But he and Jorginho have displayed they can nevertheless contribute to goals. Perhaps it is obvious that a midfielder as potent as Lampard would prize possession less than positivity, that he would reprogram them to bring in aspects of his own on-field approach, but deSarrifying them has revived them.

ANALYSIS Jose Mourinho at Chelsea: how the Special One changed the way I watch football

QUIZ Can you name the 40 most successful Premier League managers by win percentage?