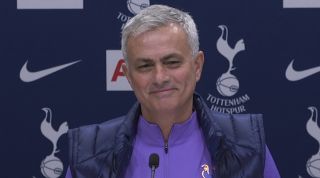 We've reached the point in the season where it's possible to begin looking at the Premier League table and drawing conclusions.

We know who's fighting for the top spots, and who's likely to have a long campaign battling relegation, but the next few weeks have a chance of firming up the situation even more.

Some teams have very friendly fixture lists between now and the end of 2019, while others will have reason to be very concerned.

We've looked at the fixtures between now and the New Year and shown who has the easiest run and who has the toughest upcoming fixtures. Here's how things look, from the team with the least difficult run right through to the one with the toughest set of games on the horizon.

Palace have taken just one point from the last 12 available, drawing with Arsenal and losing to Manchester City, Leicester and Chelsea.

Roy Hodgson’s side are unlikely to take anything from their next game against Liverpool, but there is light at the end of the tunnel: after facing the table-topping Reds, Palace have a set of winnable matches against Burnley, Bournemouth, Watford, Brighton, Newcastle, West Ham and Southampton.

The fixture list is relatively kind from mid-December onwards, however. Sheffield United have been the surprise package of the season so far but remain beatable, while Southampton, Norwich and Watford are all currently in the bottom three.

Sheffield United will be determined to prove their position in the top six after 12 matches is no fluke – and they have every chance of doing just that between now and the start of 2020.

Manchester United are up next for the Blades, after which Chris Wilder’s men lock horns with Wolves, Newcastle, Norwich, Aston Villa, Brighton, Watford and Manchester City.

United rose to seventh in the standings with a 3-1 victory over Brighton last time out, and they’ll now be looking to kick on ahead of January. Ole Gunnar Solskjaer’s side face two promoted teams in Sheffield United and Aston Villa after the international break, before a midweek tussle with Tottenham in early December.

United will then renew hostilities with Manchester City, before clashes with Everton, Watford, Newcastle and Burnley.

Southampton are in miserable form, having lost six and drawn one of their last seven Premier League outings. A historic 9-0 home defeat by Leicester was the nadir, but Saints have also been beaten by Everton, Bournemouth and a struggling Spurs side.

Ralph Hasenhuttl will hope for an improvement when the Premier League resumes latest this month. Southampton travel to Arsenal next weekend, before games against Watford, Norwich, Newcastle, West Ham, Aston Villa, Chelsea and Crystal Palace.

Leicester opened up an eight-point cushion in the race for the Champions League qualification spots when they beat Arsenal on Saturday, and they will fancy their chances of extending that lead in the coming weeks.

Indeed, the Foxes will believe they can beat each of Brighton, Everton, Watford, Aston Villa and Norwich. Manchester City and Liverpool will represent stiffer tests, before Brendan Rodgers’ side end the year against West Ham.

Back-to-back victories in recent weeks have lifted the mood around St James’ Park, and Newcastle don’t have the worst run of games between now and the end of the year. The Magpies will fancy their chances against Aston Villa after the international break, although the subsequent visit of Manchester City will likely end in defeat.

After a promising start to the season, Norwich are in the middle of a slump at present. Injuries haven’t helped, but the Canaries now have a big task on their hands after a run of seven games without a win.

Eleven points adrift of the top four, Tottenham’s chances of qualifying for next season’s Champions League are already hanging by a thread. The situation has already cost Mauricio Pochettino his job, and unless they can take a substantial number of points from the next 24 available, Spurs may have to lower their objectives for the season.

Watford belatedly picked up their first win of the season last Friday, overcoming Norwich 2-0 at Carrow Road to move off the foot of the table. The international break has probably come at the worst time for the Hornets, but they will look to make it two triumphs on the trot when they host Burnley next weekend.

Watford will then lock horns with Southampton, Leicester, Crystal Palace, Liverpool, Manchester United, Sheffield United and Aston Villa before the beginning of 2020.

Liverpool face a hectic December, as they balance Premier League commitments with the Champions League, the EFL Cup and the Club World Cup. The top-flight fixture list is reasonably favourable, though, with Crystal Palace, Brighton, Everton, Bournemouth and Watford up next for the league leaders.

Liverpool then have a weekend off as they fly to Qatar in a bid to become club champions of the world, before ending 2019 against Leicester and Wolves.

The powers that be at the Emirates Stadium insist they are still behind Unai Emery despite Arsenal falling eight points adrift of the top four. A failure to beat Southampton over the weekend would ramp up the pressure further, and the Gunners will also be expected to defeat Norwich, Brighton and West Ham.

Things look a little tougher for the north Londoners thereafter, with Manchester City, Everton, Bournemouth and Chelsea their final four opponents of 2019.

A 3-1 loss to Liverpool last time out leaves Manchester City nine points behind the table-topping Reds, meaning they have little margin for error over the next eight matches.

A clash with Chelsea at the Etihad Stadium will not be easy, with Pep Guardiola’s side then scheduled to face Newcastle, Burnley, Manchester United, Arsenal, Leicester, Wolves and Sheffield United.

Unbeaten Liverpool are the only team with fewer defeats to their name than Wolves (who are equal with Leicester and Chelsea) so far this season. Nuno Espirito Santo’s side will do well to avoid a third loss of the campaign across their next eight contests, though, with three of the current top five lying in wait.

Bournemouth are next up for Wolves after the international break, followed by Sheffield United, West Ham, Brighton, Tottenham, Norwich, Manchester City and Liverpool.

Burnley have opened up a seven-point lead over the bottom three as they attempt to retain their place in the Premier League for another season. Sean Dyche will have earmarked fixtures against Watford and Crystal Palace – his side’s next two opponents – as ones in which the Clarets should pick up points.

Manchester City and Tottenham will take on Burnley at the start of December, with Newcastle, Bournemouth, Everton and Manchester United to follow.

Graham Potter has done a brilliant job at Brighton so far, but he will know there’s a long way to go as Albion attempt to avoid relegation. Their next three fixtures are among the toughest possible, as Potter’s side take on Leicester, Liverpool and Arsenal.

The game after that, a clash with Wolves at the Amex Stadium, won’t be easy either, before Brighton battle it out with Crystal Palace, Sheffield United, Tottenham and Bournemouth.

A trip to the Etihad Stadium to face Manchester City awaits Chelsea – who are actually a point above the champions in the table – this weekend. Frank Lampard & Co. then face their manager’s former club West Ham, before tussles with Aston Villa and Everton.

The second half of their upcoming eight-game run pits Chelsea against Bournemouth, Tottenham, Southampton and Arsenal.

Bournemouth are one of the most inconsistent teams in the Premier League, so it’s hard to predict how they will get on over the next eight matches.

Their fixture list between now and  the end of 2019 certainly isn’t the easiest, with Eddie Howe’s Cherries set to face Wolves, Tottenham, Crystal Palace, Liverpool, Chelsea, Burnley, Arsenal and Brighton.

Despite Marco Silva having been under pressure for most of the season, Everton are just three points off fifth place in a congested middle section of the Premier League.

A string of positive results could see them end  the year in the European places, but the fixture computer hasn’t been particularly kind to the Toffees, who face Norwich, Leicester, Liverpool, Chelsea, Manchester United, Arsenal, Burnley and Newcastle in the coming weeks.

When it rains, it pours. West Ham have fallen to within just two places of the bottom three in the last few weeks, collecting two points from the last 18 on offer – and things may get worse before they get better.

Manuel Pellegrini’s men have Tottenham and Chelsea up next, before tricky games against Wolves and Arsenal. A December clash with Southampton could be huge for both teams, before the Hammers end the year against Crystal Palace and Leicester.

QUIZ Can you name the 51 players with the most Fantasy Premier League points in 2019/20?

ANALYSIS For Jose Mourinho to prove he is not an anachronism in the modern game, he’ll have to turn back the clock at Tottenham