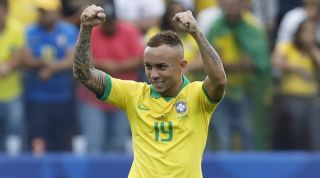 The winger played a key role in Brazil’s Copa America triumph this summer, scoring three goals – including a strike in the 3-1 final victory over Peru.

Arsenal have been regularly linked with a move for Crystal Palace forward Wilfried Zaha this summer, but the high demands coming from Selhurst Park have seen them turn attention to Everton.

The 23-year-old has spent his career so far at Gremio, scoring 38 goals in 148 appearances.

WANTAWAYS 8 players who were bigger than the club (or thought they were, anyway)