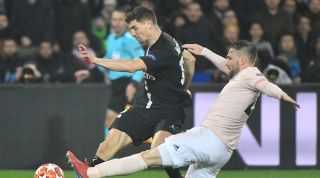 The Belgium international is a sought-after property in England as he prepares to enter the final year of his deal in the French capital.

Manchester United, Arsenal and Chelsea have all been linked with a summer swoop but Telefoot reports that Everton are also in the race.

PSG will demand €30 million for the defender, whose name is said to have come up in talks between the clubs about the potential sale of Toffees midfielder Idrissa Gueye in January.

Those negotiations came to nothing, but the Goodison Park club could return to the table with an offer for the 27-year-old at the end of the season.

Meunier has scored three goals and provided four assists in 20 league appearances for PSG this season and impressed during Belgium’s run to third place in last summer’s World Cup.

REMEMBERED Kevin Keegan on Liverpool v Newcastle, 1996: “I still have nightmares about how we threw the title away”