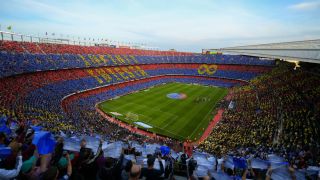 Nunez took charge at Barca in 1978, with his subsequent 22-year tenure making him the longest-serving president in the club's history.

His time at the helm took in a celebrated chapter for Barcelona as Johan Cruyff returned as head coach in 1988.

A 4-0 defeat to AC Milan in the 1994 Champions League final marked the beginning of the end for Cruyff's great side and Nunez sacked him in 1996.

"This was a decisive period in the club's history, with huge changes to the way football operated around the world, particularly in terms of finance and media attention," read a Barcelona statement paying tribute to Nunez.

"In such a long presidency, there were naturally highs and lows. But he was always strongly concerned about making the club into a financial powerhouse that could gain assets, while also being a fervent promoter of the supporters' club movement, in the belief that the financial and social aspects would in turn make the club more competitive on the pitch."

FC Barcelona are saddened by the death of Josep Lluís Nuñez, club president for 22 years (1978-2000) and a key figure in the club's contemporary history. RIP. December 3, 2018

"Real Madrid CF mourns the death of Josep Lluis Nunez, who was president of FC Barcelona from 1978 to 2000.

"The club wants to share its condolences with his family, his friends, and FC Barcelona and all their fans."

Pep Guardiola was one of Barcelona's star players during the glory days under Cruyff and the Manchester City manager addressed Nunez's passing at a news conference on Monday.

"It's a big loss, of course. He was the president of Barcelona for many, many, many years," he said.

"A big hug, especially for all his family."