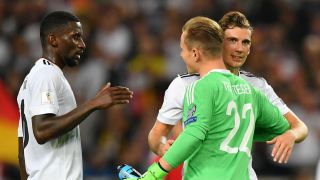 Marc Andre ter Stegen believes his Germany team-mate and rumoured Barcelona target Leon Goretzka is an "extraordinary and remarkable" midfielder who is destined for the top.

Goretzka has established himself as one of the best midfielders in the Bundesliga since joining Schalke from VFL Bochum in 2013, breaking into the Germany team as a result and starring at the Confederations Cup in Russia.

The 22-year-old has enjoyed a strong start to the campaign, scoring seven goals in his last 10 matches for club and country.

Goretzka's contract runs out at the end of the season and he will be free to negotiate with other clubs in January.

Ter Stegen did not want to be drawn specifically on the links between Goretzka and Barca, but he is confident the midfielder will go to one of the "top European clubs" eventually.

"Leon is a fantastic player," the goalkeeper told Revier Sport. "I like him as a footballer and as a man.

"He has outstanding footballing qualities. I have to say that he could play for one of the top European clubs.

"What I have seen of him in the national team is extraordinary and remarkable. I also think he will get better in the future.

"I don't know who will get him in the end - maybe he stays with Schalke and then you can only congratulate that club."