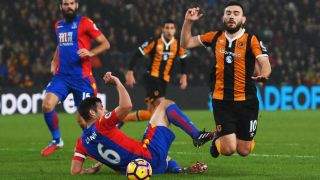 The Football Association (FA) will have the power to retrospectively punish players for simulation from next season.

Following a ruling by the FA Council, a new offence - 'Successful Deception of a Match Official' - will come into force from the 2017-18 campaign, the governing body confirmed in a statement.

A panel of one ex-match official, one former manager and one ex-player will review footage and advise whether an offence has been committed. Only in cases where they reach unanimous agreement will the player be charged.

Retrospective action can be taken when an alleged offence has not been seen by the referee and has resulted in a penalty, a red card or a second yellow card.

Accepted or proven allegations of simulation or feigning injury will result in a two-match ban for the offending player.

If a charge of 'Successful Deception of a Match Official' is proven, then the Independent Regulatory Commission will have the ability to rescind the caution or dismissal received by the opposing player.

We’re committed to cleaning up the game. From 2017-18, players who successfully deceive officials will be punished: May 18, 2017