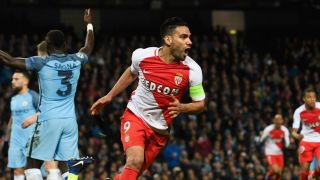 Radamel Falcao wants to extend his contract at Monaco after a redemptive season with the Ligue 1 leaders.

But back in a vibrant, youthful Monaco side the 31-year-old has flourished with 19 goals in as many top-flight starts this term, while also helping Leonardo Jardim's team into the semi-finals of the Champions League with five strikes in the competition.

Juventus visit the Stade Louis II on Wednesday and Falcao is keen to prolong his stay in the principality, with one year left to run on his deal after this campaign.

"Of course I would like to [extend my contract]," he told L'Equipe. "I feel really good here, my wife and daughters too, with the club and the city.

"We've adapted, we have a good social life and that enables my work to bear more fruit.

"I'm at peace here since the start of the season and I hope to be able to continue living here.

"I feel very good, we're happy and the results are good. Having said that, everything will depend on the club's objectives.

"The ideal thing would be to take a decision that suits both parties. If Monaco retain the ambition of winning trophies in France and Europe – and that's why I came here – I will be delighted to stay."

Falcao conceded his thoughts had already turned towards getting back on track at Monaco when it became clear he would not feature at Chelsea by the midway point of last season.

"Chelsea was the most difficult time," he added. "In the middle of the season, I already knew that I wouldn't play again, because the club had decided I wouldn't play. It was a frustrating decision because I felt rather good and I thought that I could contribute something.

"I only had training. I was prepared in case, but I never played. So, I thought already about the following season and Monaco. Everything I did was thinking about Monaco.

"The whole of that period was very difficult, at work but also in my personal life, on a daily basis. But I always told myself it was part of my career. And in the end, I think it made me stronger. It allowed me to grow, to become more mature."