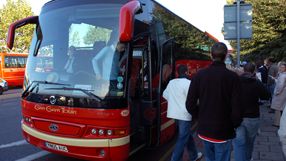 Police official Carlos Durante said that in two separate incidents in Buenos Aires on Thursday night, Chacarita Juniors supporters forced passengers to get off the vehicles and told the drivers to take them to the stadium where their side were playing Talleres.

"They threatened the passengers, made them get off and took over the vehicle," he told the TN cable news channel in a telephone interview, adding that some were carrying knives.

On both occasions, police patrols noticed something unusual about the buses, stopped them and arrested the fans, he said.

A total of around 70 fans were detained and two remained in custody on Friday morning, charged with possessing offensive weapons.

Argentine football suffers from chronic violence, with incidents often happening far from stadiums. Some of the most serious and least publicised trouble involves lower division sides.