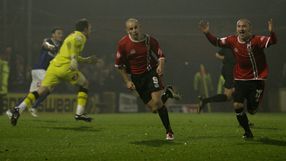 The side from the seventh tier of English football, founded after United's takeover by the Glazer family, reached the second round with a dramatic late winner by Michael Norton.

The FC United number nine appeared to kick the ball out of Rochdale keeper Josh Lillis' hands before tapping into an empty net but referee Geoff Eltringham allowed the goal to stand.

The visitors took the lead before a crowd of just over 7,000 with a neat chip from Nicky Platt before Jake Cotterill doubled their advantage thanks to a thunderous long-range shot.

Their League One opponents pulled a goal back when Anthony Elding headed home from close range and looked to have earned a replay when Craig Dawson headed an equaliser with 13 minutes to play before Norton's added time winner.