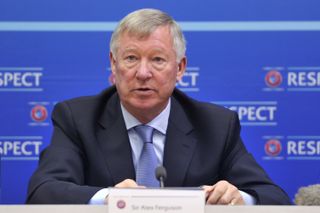 Ferguson led United to 13 Premier League titles during his illustrious stint in the Old Trafford hotseat, but has seen his old club fall well off the pace in the English top flight this season.

Under the stewardship of David Moyes, United currently sit seventh - some 14 points behind leaders Arsenal.

While not ruling out a late charge from the reigning champions, Ferguson outlined his excitement at so many teams being in contention, with the top three of Arsenal, Manchester City and Chelsea currently separated by just two points.

"This year for the first time it really looks as if five or six could be involved, so it's a great Premier League," said Ferguson, on the day he was named as UEFA's new coaching ambassador.

"It's still not an easy league to win. I think the English game is the most honest and is the hardest league to win in terms of the competition you face. You can lose to anyone.

"You have to say Manchester City are playing so well, there is no dispute about that, but the teams at the top at the minute must have a big chance.

"Arsenal must have a big chance. Everyone keeps writing them off, saying they won't last, but we're into the second half of the season and they are still there.

"Then you've got Chelsea, Everton, Tottenham, who are starting to do well.

"United always do well in the second half of the season, so we've got a fantastic league and we should be proud of that."

Asked specifically about United's hopes of retaining the title despite their dismal recent form, the Scot added: "United can do anything. They have got that great philosophy and history, they will always do well.

"I can watch the team whenever I want and I've really enjoyed it.

"I'm going as a supporter now and instead of suffering with the team, I'm suffering or enjoying it with the fans. I'm really enjoying watching the team play."