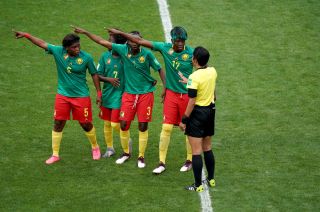 FIFA has opened disciplinary proceedings against Cameroon over their behaviour in Sunday’s Women’s World Cup last-16 match against England.

On two occasions during the contest in Valenciennes, which England won 3-0, Cameroon remonstrated with the officials at length and looked as if they may not play on after VAR decisions went against them.

A FIFA spokesperson said on Wednesday: “Following the round of 16 match between Cameroon and England on June 23 at the FIFA Women’s World Cup, we can confirm that proceedings have now been opened
by the FIFA Disciplinary Committee against the Cameroonian Football Association for alleged breaches related to article 52 (team misconduct) and article 57 (offensive behaviour and fair play) of the FIFA Disciplinary Code.

“As proceedings are now ongoing, please understand that no further comment can be made at this stage. Further updates will be provided in due course.”

The two moments of fierce protest from Cameroon where it appeared play might not be able to continue came just before half-time, when the decision to rule out Ellen White’s finish for offside was overturned via VAR to make it 2-0, and just after the break, once again involving an offside call, as Ajara Nchout’s strike was disallowed following a review.

The ill-tempered game at the Stade du Hainaut also saw yellow cards issued to Cameroon’s Yvonne Leuko after catching Nikita Parris in the face with an elbow, and Alexandra Takounda for a poor challenge on Steph Houghton.

There was also an incident in which England’s Toni Duggan had her arm spat on by Augustine Ejangue.

After the match England boss Phil Neville said “it didn’t feel like football” and spoke of feeling “completely and utterly ashamed of the behaviour” of Cameroon.

Neville’s counterpart Alain Djeumfa said there had been a “miscarriage of justice” and that “the referee made a lot of mistakes”.