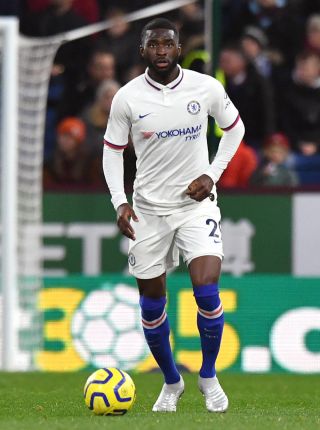 Chelsea defender Fikayo Tomori believes FA Cup success would be huge in the development of Frank Lampard’s young side.

Michy Batshuayi’s deflected effort got the Blues off to a fine start at Hull on Saturday evening, when Tomori’s second-half header proved crucial after Kamil Grosicki’s free-kick ricocheted home during a nervy ending.

Chelsea dug deep to secure progress from the tricky fourth-round tie at the Sky Bet Championship play-off hopefuls, keeping alive the west Londoners’ hopes of a domestic trophy at the end of Lampard’s first season in the hotseat.

In the goals, and in the next round! 👌@fikayotomori_#HULCHEpic.twitter.com/1Dy9OtDBbG— Chelsea FC (@ChelseaFC) January 25, 2020

The club’s all-time top scorer has leaned heavily on young talent like Tomori this term and the centre-back, who spent the 2017-18 season on loan at Hull, believes the FA Cup can be the catalyst of bigger things.

“It would mean a lot (to have a good FA Cup run),” the England international said.

“A lot of us are in our first full season in the Premier League and playing for Chelsea as well and it would be a big thing.

“Chelsea have got such a great history in this competition, and the manager has as well, so it would be nice to win the trophy as for many of us it would be our first one.

“We are just taking it round by round. We have a lot of games coming up and we want to win as many as we can and hopefully we can have a trophy at the end of it.”

But Tomori knows there must be vast improvements if they are to reach the Wembley showpiece on May 23.

Not only did Chelsea ride their luck at times against Hull, but the past week has also seen them suffer a last-gasp loss at Newcastle and endure a galling home draw with Arsenal.

“We could have been probably three or four up at half-time so to not take those chances was pretty disappointing,” Tomori said of Saturday’s FA Cup clash.

“We made it a lot more difficult for ourselves than it should be.

“It was nice to get the win against Hull and I am happy to get the goal and happy to be in the next round but we still know we have to improve.”

Tomori told Chelsea TV: “We were expecting Hull to come on to us.

“Playing a Championship side at their home in the FA Cup, they have nothing to lose really.

“We dealt with it pretty well and my goal came at a good time because it knocked a bit of the wind out of their sails.

“Their free-kick going in gave them another kind of energy so we are happy to get the win and credit to Hull as well because they played well.”

"I was pleased with the response of the boys after going 2-0 down and I thought we had some really good performances from our players."#hcafc | #theTigers— Hull City (@HullCity) January 25, 2020

As for Hull, there were certainly moments of promise to take into the Championship campaign as they played in front of a sell-out home crowd for the first time since relegation from the Premier League in 2017.

“It felt really good and it was nice to see,” Tigers boss Grant McCann said.

“The fans got right behind us and when we got it back to 2-1 you could really feel them getting behind the side. You could feel that roar that I thought was going to get us back into it.

“We had a couple of half-chances but it just wasn’t to be.”