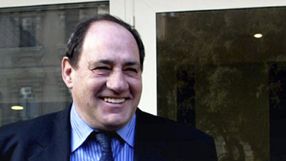 "It is with a heavy heart the New York Cosmos report that... Cosmos legend Giorgio Chinaglia has passed away this morning," the club said on their website.

"Giorgio was one of the most exceptional players to ever play in the United States and was the Cosmos's greatest player ever. Our condolences and thoughts are with Giorgio's family at this time."

Chinaglia was one of the pioneers of the North American Soccer League (NASL) along with Brazilian great Pele and former Germany captain and coach Franz Beckenbauer.

The Italian won four NASL titles and hit 242 goals in 254 matches, making him the all-time leading scorer in the competition.

Chinaglia came to prominence with Lazio, playing for the Rome team between 1969-76 and winning the Serie A title in 1974. He later became club president between 1983-85.

He won 14 caps for his country, scoring four goals, and played in the 1974 World Cup.

More recently Chinaglia was a fugitive of Italian justice in the United States after prosecutors brought charges of stock market rigging linked to his consortium's bid to buy Lazio.

He died after suffering heart problems, according to media reports.