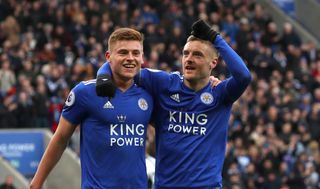 It may be impossible to accurately predict how footballers will perform, but Fantasy Premier League managers can look to the previous season for clues.

With that in mind we have projected the FPL points returns of players in the first five gameweeks of the new season based on the points they scored in 2019-20’s corresponding fixtures.

For fixtures against newly promoted sides, we have taken an average of the number of points each player scored against last season’s three relegated sides, while promoted players are obviously omitted from our findings.

The results show that it is two Leicester City stars at opposite ends of their careers who could light up the FPL landscape in the opening weeks.

The home game against Aston Villa proved profitable for both men. Leicester won 4-0 and both Barnes and Vardy notched a brace apiece.

For midfielder Barnes that meant a 19-point return while for Vardy 11 points were earned despite playing just 31 minutes as a substitute. Could Villa at home prove equally fruitful this time around?

While Manchester City will miss the first gameweek of the season, two of their biggest talents still make it into the top 10 for projected points based on last season’s performances.

Raheem Sterling and Kevin De Bruyne‘s side will play Wolves (a), Leicester (h), Leeds (a) and Arsenal (h) from gameweek two to gameweek five, with both players averaging eight and 8.25 points per game respectively in those four games last term.

In particular, it was Arsenal at home that saw both players cash in, with De Bruyne notching 14 points and Sterling 10 at home to the Gunners.

City will be looking to take back possession of the Premier League title from Liverpool, but which of the Reds are set to hit the ground running?

Mohamed Salah similarly averaged almost eight points a game last season in the corresponding fixtures to Liverpool’s first five games this season, and like his City rivals, cashed in against Arsenal.

The Egyptian notched a 15-point haul against the north London side courtesy of a 3-1 win and a brace, but also scored points against Chelsea and the relegated sides, against whom he averaged nine points.

Salah’s team-mate Trent Alexander-Arnold meanwhile scored 30 points in last season’s corresponding fixtures, but at £7.5m goes into the new season as the most expensive defender.

Elsewhere, two Southampton players may offer a cheaper solution to get off the mark, with defender Jack Stephens and midfielder Nathan Redmond projected to score well.

Stephens managed 11-point hauls with a clean sheet and an assist both away to Crystal Palace and at home to Tottenham last season – those will be the south coast side’s opening fixtures of the new campaign.

Redmond fans will meanwhile be encouraged by the England winger’s performance at Palace last year, a goal and an assist helping him to 13 FPL points.

On the subject of affordable players who deliver, Wolves’ Raul Jimenez and Sheffield United’s John Egan round out our top 10, both earning 31 points last season in the corresponding fixtures.

If history repeats itself, a handful of these players could see your team off to a superb start.