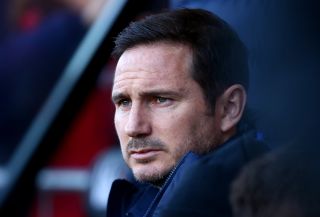 Frank Lampard wants his Chelsea side to play at “full-throttle” and has told his stars to be “selfish” to cope with the Premier League’s behind-closed-doors finish.

The Blues will have their first taste of top-flight action minus the fans when travelling to Aston Villa on Sunday.

Chelsea cemented fourth place before the coronavirus shutdown and now manager Lampard has challenged his Stamford Bridge squad to kick on and seal Champions League qualification.

While the entire league will be getting to grips with empty stands, Lampard insisted his players must find new ways to replace the adrenaline created by a full house.

“I think we have to go full throttle no matter what game it is; we have the ability to use more subs than usual,” said Lampard.

“I mean full throttle as in giving the game everything we can do, whatever the gameplan is. We have to try to be at our best.

“It won’t be easy because of the circumstances but all teams are in a similar situation.

“So I just expect us to be ready and to be focused. We know how much is at stake and we have to start well.

“I think we all feed off the atmosphere of a packed stadium, it’s the beauty of the Premier League, the home support, the tribalism, what it does to you in terms of adrenaline and how it makes the game run.

“We have to inject that in ourselves, that’s something the players individually and collectively as a team, have to be a bit selfish about it, to want to perform at the highest level even though there isn’t a crowd. Because there’s certainly a crowd at home watching, with people watching all over the world.

“Players will understand that and will want to perform as well as they can.”

The emergence of young Scottish talent Billy Gilmour just before lockdown and now the return to full fitness of Ruben Loftus-Cheek and N’Golo Kante will bolster Chelsea’s ranks for the Premier League resumption.

Lampard has told his full squad to be ready for action, admitting he fully intends to reap maximum benefit from the temporary ability to make five substitutions.

Asked about any extra selection issues, Lampard said: “I think it is a nice problem. We have missed big players this season in big parts. Ruben, for example, hasn’t played for us.

“N’Golo Kante has played about 50 per cent of games. You could go through them and I have missed them. I enjoy the problem.

“A message to the players on Sunday, whether you start or not, we are going to need the squad. There is going to have to be a togetherness.

“The games are going to look slightly different. Subs are going to be absolutely crucial. So the problem I have going in is a nice one.

“The players just have to perform when asked to and they look ready to. Subs, I think it is a very good thing considering the circumstances and the bigger bench. I think that should be something that stays the course because you work with players all through the week as a squad.

“I think with the five subs; we saw that the energy levels on the other night and the injuries that it is crucial probably for player care as well to keep enough players fit.”