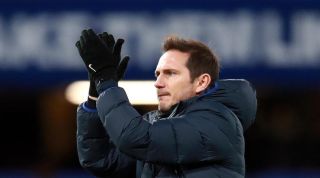 Frank Lampard has admitted that he is keen to sign a new striker before the January transfer window closes next week.

Chelsea's finishing let them down against 10-man Arsenal on Tuesday, with the Blues only able to draw 2-2 with their London rivals.

Tammy Abraham hobbled off at the end of that match after injuring his ankle following a collision with an advertising hoarding.

Lampard provided an update on the England international's fitness ahead of Saturday's clash with Hull in the fourth round of the FA Cup.

And he also acknowledged the need to bring in another option up front before the end of the month, particularly if Olivier Giroud departs.

"The good news is he hasn’t fractured anything," Lampard said of Abraham. "The other news is we still have to see how he develops. It's not a clear-cut one.

"He's not fit for the weekend, but whether he'll be fit for Leicester after that I'm still not sure. It's still not clear at the moment.

“I think the impetus to bring in a striker or a player to get on the end of chances is there. The recent games have shown that. When you are creating 20 chances a game it is clear.

“With Olivier it is the same situation. There has been contact from other clubs. He’s still our player.

“There is choice. It’s not the ideal window, history has proven that. It is about getting the choice right. The club know my thoughts on it.

Despite his desire to add a new forward to the ranks, Lampard insists he is not on the lookout for a new goalkeeper.

Kepa Arrizabalaga has had a disappointing season and was arguably at fault for Hector Bellerin's equaliser on Tuesday.

"He will have to deal with that," Lampard said of the goalkeeper. That’s what being a footballer is about. There is spotlight on them.

"The important thing is not to get embroiled in what people are saying, not just Kepa but any player. I am not looking at strengthening that position now. Kepa knows and is honest that there have been some mistakes."