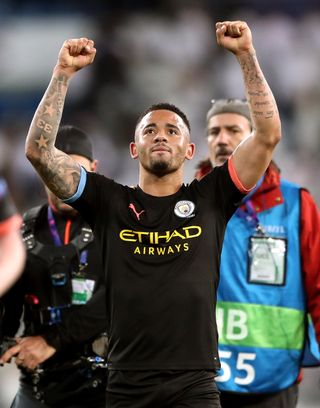 Manchester City will hope to carry momentum from their stunning victory over Real Madrid into Sunday’s Carabao Cup final.

City are bidding to win the EFL Cup for a third year in succession and a fifth time in seven seasons as they face Aston Villa at Wembley.

They go into the game in good spirits after defying the odds to come from behind and beat Spanish giants Real in the Champions League on Wednesday.

That result also lifted some of the gloom at the Etihad Stadium after the club were hit with a two-year ban from European competition over Financial Fair Play breaches.

Striker Gabriel Jesus, who scored City’s equaliser, said: “We are very proud of the performance.

“There will be another game, the second leg, and that will be difficult, but now we have to focus on the final on Sunday and play to win the first title.

“Sunday is important. It’s been a big week because we also played Leicester away, a team with a lot of quality, and went seven points in front of them (in the Premier League).

“So we’ve had two very good games, and now it’s a final. It’s important to win the first title of the season.”

Jesus was surprisingly chosen ahead of City’s record goalscorer Sergio Aguero at the Bernabeu and then, equally unexpectedly, did not play as a centre forward. Instead he produced an impressive performance from the left wing while Kevin De Bruyne and Bernardo Silva operated as false nines.

Jesus, 22, said: “When I started to play at Palmeiras I was a winger in the first team.

“After a year I started to play as the second striker, and after that as the first striker, so I can play there.

“I can play all four front positions – both wings and both striker positions. I enjoy the work and it doesn’t matter if I have to run back. I am young! I have the power and energy to do this.”

City’s hopes of silverware this season now lie in the domestic cups and the Champions League after a failure to maintain a strong Premier League title defence in the face of Liverpool’s excellence.

He said: “I know how difficult it is to reach the final. When you start the competition everyone is involved. When you arrive at the final it’s because we’ve done really well, in terms of winning games and the mentality of playing every three of four days.

“It is a great achievement for us but now we must try to win.”

Guardiola was quick to put the midweek heroics behind him and focus on Villa. Despite their opponents being involved in a relegation battle, the City boss expects a strong challenge.

He said: “The result of the last days is past, it is gone, and now we focus on the final, a different competition.

“They are a historic team, they have a Champions League (European Cup win) in their history and I think it will be a fantastic game.

“They are well organised and have a keeper with incredible experience in Pepe Reina. They have fast players up front and physicality in the middle, especially with the central defenders, good headers.”

He said: “It was a good game when we went there but it’s not good preparation for the final. We will prepare tactically and mentally knowing we have an incredible challenge to win.”