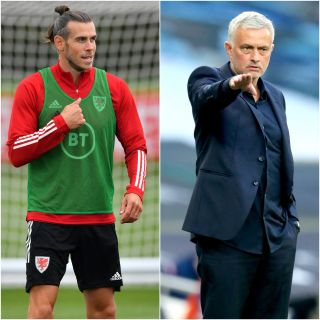 Gareth Bale is confident Jose Mourinho can deliver trophies to Tottenham and is looking forward to working with the manager who tried to sign him twice previously.

Bale completed his return to Spurs on Saturday, signing a season-long loan from Real Madrid where he spent the last seven years.

Mourinho tried to bring the Welshman to the Bernabeu 12 months before he eventually arrived and then also wanted to sign him at Manchester United.

Bale, who will not be fit until October due to a knee injury, believes the Portuguese is the “perfect” man to help Spurs make that next step.

“I spoke to him prior to coming over obviously when we were speaking,” Bale said on BT Sport. “He’s spoken to me about a few positions that he would like me to play and obviously I’m happy with that.

“Obviously he’s a big key incumbent, he’s a household name, he’s a winner and I think he’s the perfect fit for Tottenham.

“We all want to win trophies and he knows how to better than anyone so hopefully this season can be that season. What every Tottenham fan wants is a trophy so we’ll be trying as hard as we can in every competition to do that.”

Bale endured a tough ending to his time at Madrid, falling out of favour under boss Zinedine Zidane and receiving plenty of criticism from fans and media.

He is coming back to a club where he is sure to feel the love and the 31-year-old thinks that will help him produce his best.

“Coming back here, knowing I was going to get a good reception – I love the club, I loved my time here, and to come back and feel that emotion, hopefully now we can kick on this season, try and win a trophy, if not two, and try and enjoy my football and try and give the fans something to smile about.

“There’s always pressure being a footballer, every performance is analysed, criticised and all this.

“I understand there’s going to be pressure and expectation but I feel like when I’m happy I play my best football and I feel like coming back here to Spurs I’m very happy, I already feel the love at the ground just being with the staff and the players and I feel like when I’m in that mindset my best football comes out and, if that’s the case, I have no worries and I just want to try and play and let my natural ability take over.”

Despite the way his time ended in Spain, Bale still looks back with fondness having won so many trophies.

“I’ve enjoyed it. I’ve said before I love living there, my family’s settled, my kids are happy and I’ve enjoyed being at the club,” he added.

“Obviously there’s ups and downs at every club wherever you go. Maybe the highs have been incredibly high and the lows maybe have been a bit lower but I’ve enjoyed my time there, I enjoyed playing for Real Madrid and achieving what we achieved, achieving what I achieved.

“But it’s time for the next chapter in my career. I want to continue to win trophies and I want to do it with Tottenham.”