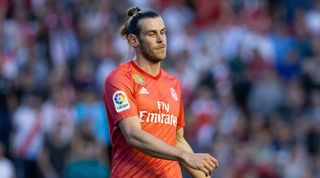 The Wales international is on the market this summer as the Spanish club look to raise funds for a flurry of signings after a disappointing 2018/19 campaign.

Real have already splashed out on Eintracht Frankfurt striker Luka Jovic and Chelsea winger Eden Hazard, while they are also keen on United midfielder Paul Pogba.

However, the Evening Standard reports that the Old Trafford club have ended their pursuit of Bale and turned down the opportunity to hold talks with the Bernabeu outfit about a potential permanent or loan move.

United executive vice-chairman Ed Woodward has long been an admirer of the 29-year-old but will not pursue the former Tottenham man as the Premier League club focus on signing exciting young prospects.

United dropping their interest in Bale is a blow to Real’s hopes of moving him on, as the Premier League side are one of only a few clubs who would be able to afford a transfer fee and the former Tottenham man’s wages, believed to be worth around £600,000 per week.