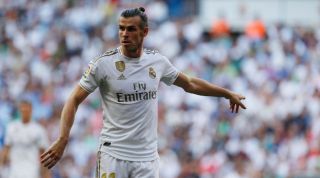 Reports this week claimed that the Wales international could be heading for China, after he met his representative Jonathan Barnett in London.

In the summer, Bale came close to joining Jiangsu Suning after agreeing a deal with the Chinese Super League side, only for Real Madrid to decide against the sale late on.

The 30-year-old has been regularly involved in Zinedine Zidane’s squad this season and Barnett insisted that he’s going nowhere.

“Gareth is delighted to play in Madrid,” the agent said when asked about a potential departure, as reported by the Independent.

“China? Don’t believe everything you hear.”

Bale has scored two goals and provided two assists in seven appearances for Real this season but is currently out of action through injury.

He has been regularly linked with a return to the Premier League in the past, with Manchester United frequently being credited with an interest in the player.

Bale joined Real from Tottenham Hotspur for a then-world record fee of £85 million in the summer of 2013.

He has won four Champions League trophies and the La Liga title during his time in Spain, but has come in for frequent criticism more recently.

But Zidane also batted away talk of a sale, saying: “I don't think he ever talks about leaving. When he's available he trains and plays. He's played a number of games.

“I have to say we have a good relationship. He's here with us, he trains well and works well when he's available.

"He's not available at the moment because he's got an injury, that's all.

"The problem is, there is a lot of talk about lots of different things. The important thing is that he's ready when he's 100 per cent.

"He's a good player, you know what kind of player he is. At the moment he's not available. You're all trying to create something that isn't there in our relationship.”