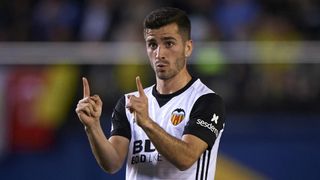 Valencia left-back Jose Luis Gaya has committed his future to the club by signing a new five-year contract.

The defender has previously been linked with Manchester United, Juventus and Atletico Madrid but will now be at Mestalla until 2023.

Gaya's new deal also includes an increase in his release clause, with the fresh terms requiring a bid of €100million to acquire the 22-year-old.

"I really trust in this ambitious and exciting project," Gaya said.