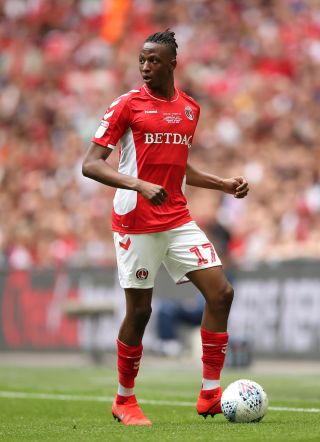 Steven Gerrard said Joe Aribo can become a better player at Ibrox after the Rangers boss finally secured the signing of the Charlton playmaker.

Aribo has been top of Gerrard’s wish list for most of the summer and the Light Blues manager has now got his man on a four-year deal, subject to international clearance.

The highly rated 22-year-old was targeted by Celtic at one point, as well as Premier League outfit Southampton, but Londoner Aribo has chosen to put his trust in former Liverpool skipper Gerrard.

Having watched his new recruit help drive the Addicks to promotion to the Sky Bet Championship through the play-offs, Gerrard believes even better things lie ahead.

Gerrard, whose club will have paid a compensation fee of around £300,000 to land Aribo, told RangersTV: “There were a lot of clubs in for Joe around Europe, in the Premier League and the Championship. There was a lot of interest in him, but for me it’s just another top player joining Rangers.

“He’s mobile, dynamic, can burst past a player and create and score goals. There is room for him to develop, but he’ll give us something we’ve not got in the midfield department.

“He’s left-footed, which is something we don’t have in our midfield at the moment, so he’ll give us more balance. We have a good midfield, but currently we don’t have a player with Joe’s characteristics.

“He is tall, athletic and quick. He’s a box-to-box player and is not afraid to open the door when he gets around the box and he can unlock defences.

“We’re confident we can turn Joe into an even better player and I’m really looking forward to working with him.

“He’s still young and we firmly believe there is a lot to come from him, but we need to be patient in order to allow him to continue his development and to improve as a player with the club.”

Charlton boss Lee Bowyer criticised Aribo’s decision to move to Glasgow earlier this week, insisting staying in England would be better for his development.

But he took a more diplomatic approach after news of the deal was confirmed.

“We’re disappointed to see Joe go,” Bowyer said on the Charlton website. “He has come on a lot as a player over the last 18 months.

“I’d like to thank him as he played a big part in our promotion season and wish him the best going forward. We’ll be watching him and hope he can go on to play at the highest level possible.”

Magpies owner Mike Ashley is on the hunt for a new boss after Rafa Benitez’s departure, with sources in the north-east of England claiming Newcastle are “confident” of securing Gerrard as the replacement for his former Liverpool mentor.

If Ashley does move for the Light Blues manager, it will set him on another collision course with Gers chief Dave King, who is still embroiled in a long-running court battle with the Sports Direct tycoon over Rangers’ retail contracts.

But Ibrox favourite McCoist does not believe Gerrard, who has already dismissed links to Derby this week, will be swayed by a move to St James’ Park.

Asked whether moving to Newcastle would be a step up or a sideways move, McCoist told talkSPORT: “I think Rangers are a bigger club. I think Newcastle play in a far better league. That’s the way I see it at this moment in time.

“You know what I think of north-east football. I absolutely love the people of the north-east and I love the football in the north-east, but what kind of step would it be for Steven Gerrard?

“They’re both massive clubs, but I’m not sure right now it would be a great move for Steven Gerrard to be honest with you, because he certainly has unfinished business at Rangers.

“I wish Newcastle all the very best in their search for a new manager, but leave ours. As they would say in Glasgow, ‘Leave oors alane’.”