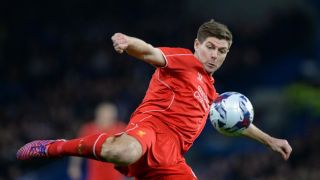 The pre-season tournament, which takes place across North America, is set to return for a third edition between July 11 and August 5 this year.

And, in an intriguing sub-plot, Gerrard - who will end his 26-year association with Liverpool to join the Galaxy in July - could go up against either United or Chelsea, or even both.

Fixtures for the tournament, which was won by United in 2014, have yet to confirmed, so it remains to be seen for sure if Gerrard will take on his old foes.

Gerrard faced United for the final time in his Liverpool career last month, but lasted just 38 seconds as a second-half substitute before being sent off for a stamp on Ander Herrera.

La Liga leaders Barcelona will also provide a star attraction at the Champions Cup, with Lionel Messi & Co. signed up to take part.