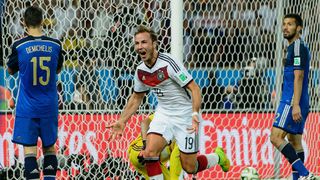 Living as the man who scored the winning goal in the World Cup final has been challenging for Mario Gotze.

Four years ago, the lavishly gifted forward was the toast of Germany after his expertly taken extra-time strike sunk Argentina 1-0 to give Die Mannschaft their fourth world title.

Gotze had just completed his debut season at Bayern Munich and won a domestic double but the intervening period has been tough.

Now back at Borussia Dortmund and having suffered the effects of a debilitating metabolic disorder, the 26-year-old was unable to secure a place in Joachim Low's talent-stacked squad for Russia 2018.

"People think, 'It's over now, he will never make his level again'," Gotze told DAZN as part of the 'Being Mario Gotze' documentary.

"Then I ask myself, 'What's the level? The decisive goal at the World Cup?' That's right, reaching that level again might be difficult.

"The bar has been raised so high by the World Cup goal that everything below is perceived as bad. The goal is anchored in people's minds and that's not easy.

"So, I am definitely struggling with the association of the goal. It is always transmitted in every game."

Gotze's return to Signal Iduna Park, where he progressed through the youth system to be the jewel in Jurgen Klopp's all-conquering side at the start of this decade, found him gradually working his way back towards peak form before illness struck.

"I was physically overwhelmed and I expected too much [from myself]," Gotze explained.

"My thought was always to do more than the others. Now I know that it is good to give the body some time.

"That's why I had to pull the ripcord. It was a very frustrating time.

"If you have an injury, it's easy: The bone or ligament heals again, then it's good.

"But to understand that [fitness] does not go well at another level was the biggest challenge."

Being Mario Gotze will be shown by DAZN at 7pm CET on Saturday – the first episode of a four-part documentary running until Tuesday, June 12.